The Research Chair at GHU Paris, Psychiatry and Neurosciences

Since its creation in January 2016 at the Hôtel-Dieu hospital in Paris, the Research Chair in Philosophy at the Hospital has expanded its scope, working with various hospital and care facilities, and is currently working with the GHU-Paris, Psychiatry and Neurosciences (Sainte-Anne, Maison Blanche, Perray-Vaucluse). It is part of an even broader program of research, teaching and experimentation, as it also includes the Université des patients (Patients’ University) (founded and directed by Professor Catherine Tourette-Turgis, from the Sorbonne University and La Pitié-Salpêtrière Hospital), various partnerships (see ecosystem) and implementation of POC (particularly with Les Sismo). 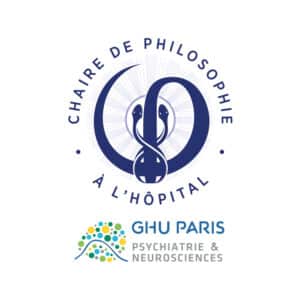 After having developed a medico-healthcare project, completely rethinking the territorial organisation of Parisian medical care with 170 care centres spread throughout the capital, and consolidating their administration of these centres, the project aims to enable these three facilities to become the leading Parisian institution for mental illness and the nervous system. A total of 60,000 users, or 1 in 40 Parisians, are treated each year by the 5,600 healthcare professionals of the GHU, which has 600 doctors.

The association of neurosciences and psychiatry constitutes both a heritage and a singular identity for this new hospital, which is recognised by local players such as the City of Paris. The academic dimension of the “GHU” will enable permanent interaction between clinical practice, training, teaching and research.

The academic dimension of the “GHU” makes ongoing interaction between clinical practice, training, teaching and research possible. The GHU Paris is thus the melting pot for innovation in every field, where each individual is trained, shares his or her knowledge, is enriched by cutting-edge scientific work, and contributes to the care of tomorrow.

The new hospital is continuing its key partnerships, in particular with its two historical partners: the Paris sections of the Saint Maurice Hospitals and the ASM 13. In addition, GHU Paris is part of a network of multidisciplinary partners in all its fields of activity.

Thanks to a simplified and clear organisational structure, the GHU Paris is a more efficient, more attentive hospital, and more open to the city.

The GHU Paris provides customised solutions for local needs, thanks to the sector, emergency series and recourse. The GHU Paris has become a privileged partner of all the major players in the healthcare, social, medico-social, teaching and research fields.
As the leading providers of psychiatric and neuroscience care in France, the hospitals that have joined together to form GHU Paris will benefit from an exceptional context in which to develop major projects for Parisians, in particular:

Maison Blanche, Perray-Vaucluse and Sainte-Anne: the origins of GHU Paris 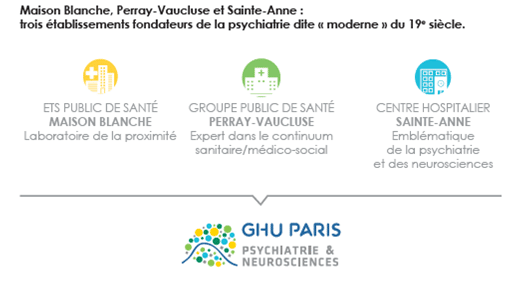 Sainte-Anne, Maison Blanche and Perray Vaucluse hospitals share a common history, namely the development of the Mental Illness and Brain Clinic. These former mental health facilities along the Seine have cooperated over the past few decades, and their collaboration has grown in recent years. This was the case with the creation of the first Parisian Territorial Hospital Community for Psychiatry, and more recently with the Territorial Hospital Group, still in partnership with the ASM 13 and the Paris sections of the Saint-Maurice Hospital.

The Sainte-Anne Hospital, where both stereotaxis and neuroleptics were first investigated, has earned an international reputation, thanks to its “research” expertise. With 700 beds and spaces in psychiatry and 125 in neuroscience, Sainte-Anne Hospital has historically been responsible for the 5th, 6th, 7th, 14th, 15th and 16th arrondissements, i.e. the south of Paris.

The Maison Blanche public hospital, initially located in the municipality of Neuilly sur Marne, embraced the shift towards sectorisation by establishing nearly one hundred community facilities in the north of Paris: the 8th, 9th, 10th, 17th, 18th, 19th and 20th arrondissements, where the population density is particularly high. The hospital has developed a sophisticated expertise in providing community services and, before the merger, had 1,100 beds and spaces.

For Groupe Public de Santé Perray-Vaucluse, based in Essonne before moving its administrative headquarters to the capital, a number of transformations preceded the creation of a new hospital: the transfer of its local activities to Sainte-Anne and Maison Blanche in 2016 (this involved caring for the populations of the 7th, 8th and 17th arrondissements) marked a decisive milestone. Perray Vaucluse has repositioned itself in the leadership of a care sector for patients with pathologies that seriously impair their independence. The health care space (28 beds) /medico-social space (160 places) is a major issue in the patient pathway, thus enriching the therapeutic range of the current Paris GHU.

In total, the GHU Paris comprises 2,000 beds and 160 medical-social spaces.